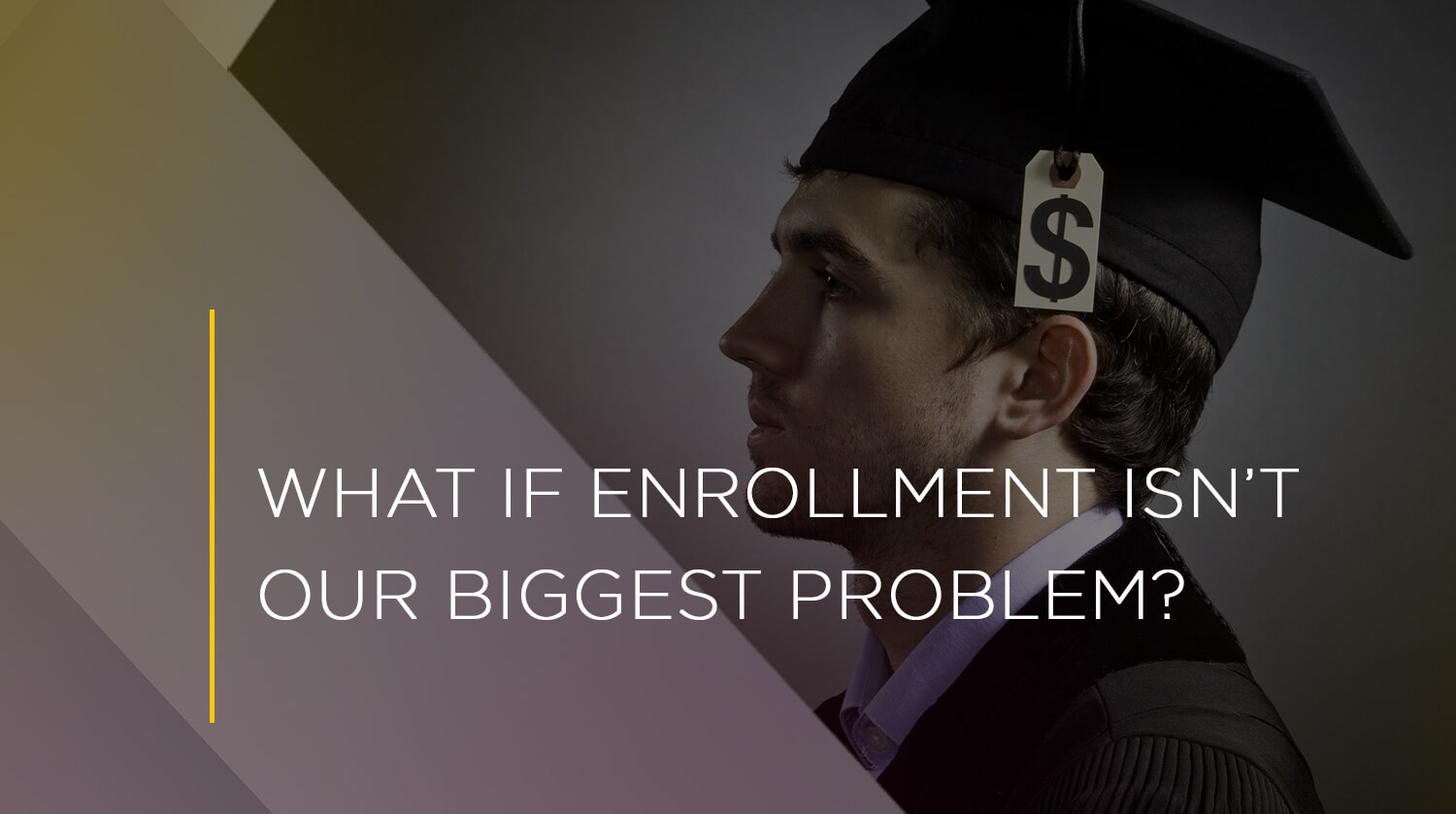 Sobering new research about the effect of wealth on student completion rates.

We’ve been focused on the enrollment crisis for years. But what if getting students to complete college is harder than getting them to enroll?

New data from the Department of Education shows that the percentage of students who head straight to college after high school has risen from 63% in 2000 to 70% in 2016. However, there is a major completion problem, disproportionately affecting lower-income students.

One statistic shows that the graduation rate for Pell students is 51% compared with 65% for non-Pell recipients. With student loan debt topping $1.4 trillion and the increasing phenomenon of student hunger and even homelessness, raising student success rates is a complex issue. Students are struggling not just to pay tuition, but even to cover necessities. A just released Cengage study show the vast majority of today’s students are stressed over the cost of course materials (85%), housing (73%), healthcare (69%), and food (63%).

In March 2019, Inside Higher Ed published a selection of articles under the topic, “Students, Finance & Completion.” The aim of the compendium is to inform the higher education community of the strategies being developed to assist students in completing their programs by specifically addressing financial issues.

A state-by-state look at completion incentives.

In “Debates Differ on Completion Incentives,” Ashley A. Smith looks at government policies—both punitive and incentive-based—which aim to increase student completion. While there is a high correlation between sustained high credit loads and graduation, states diverge widely in how to encourage students to enroll.

At a national level, last year the US Congress considered but failed to adopt the PROSPER Act as part of the Higher Education Act reauthorization. The measure would have provided a $300 bonus to students taking more than 15 credits.

Both the penalties and rewards remain controversial, because state incentive programs fail to help the vast majority of non-traditional community college students, who are also most likely to be penalized for failing to enroll full-time.

In the article, Jonathan Lightman, executive director of the Faculty Association of California Community Colleges explains: “If you say the community college is open to the community, then you have to figure out the strategies to meet people where they’re at. We’re not going to get people in an older demographic—the [25-year-old plus]—to go full-time.”

Addressing non-completion at the source.

In “Tackling Poverty to Increase Graduations,” Smith profiles Amarillo College’s “no excuses” policy, a radical effort to eliminate the kinds of financial need that become reasons to drop out of school.

Russell Lowery-Hart pioneered the policy in 2014 when he became president. Lowery-Hart knew that 72% of Amarillo students struggle to meet basic needs. More than half (59%) are housing insecure, a similar number (54%) are food insecure, and 11% have experienced homelessness.

In the article, Lowery-Hart says he decided that: “Our job is not to fix students; it’s to fix ourselves.” He established an Advocacy and Resource Center on campus as complete resource for students. There they can access social services and other forms of assistance including a food pantry, legal aid, childcare resource referrals, and a clothing bank.

The school identifies needy students early in the semester, by looking at their financial aid information, and contacts those who have an annual income below $19,000. The college also relies on social workers who support low-income students.

For its part, Amarillo College has seen real success. The vast majority of students, 86%, received services through the Advocacy and Resource Center. Of these, 69% continued their education at the college, double the percentage of those who did not. Even better, the three-year completion rate for the entire college rose from 26% to 45%.

Andrew Kreighbaum’s paper “The Link Between Completion and Loan Repayment,” paints a stark picture of the critical importance of completion for student borrowers. While the information may not be surprising, it does indicate the kind of financial turmoil non-completers face.

By seven years after graduation more than two-thirds of community college graduates have begun paying down principal, but, during those same years, non-completers will accrue interest and end up owing more than their original loan.

Public institutions have a better track record than for-profit schools, where more than 48% of graduates owe more than their original loans seven years post-graduation.

It’s clear that without a degree or certificate students may find enrolling in school was a devastating financial mistake. Regrettably, some for-profit schools leave their graduates in financial straits as well, struggling to make loan repayments.

According to Smith, low-income students appear to be disproportionately singled out for verification. The US Department of Education is increasingly flagging students whose “expected family income” is zero, which sets in motion a cumbersome process.

For instance, Northern Virginia Community College (NOVA) noted that in 2017, 8,660 students with $0 EFC were selected for verification, or about 21 percent of all FAFSA applicants. This is an increase over 2016, when only 7,526 students were selected, or 18.4 percent.

If students become too intimidated by the process, they might give up thousands of dollars of financial aid. The director of financial aid at NOVA, Joan Zanders, says in the article that some low-income students worry that they “have done something wrong by being selected and walk away.”

Sadly, this happens all too often. The National College Access Network estimates 50 percent of low-income students are selected each year for verification and 22 percent of them, or 90,000, will give up on applying for financial aid.

There is good news about financial aid and completion. In “Sometimes, Practical Policy Can Be Exceptional,” Mike Krause offers an opinion on the Tennessee Promise, a generous scholarship program which launched in 2014.

“Free” is a very powerful message, says Krause, and thousands of Tennesseans would agree. The state’s college-going rate which hovered at 55% for a decade, grew 5% immediately after Tennessee Promise was enacted and is now about 65%.

And the Tennessee Promise guarantees more than financial aid. It created a network of more than 7,500 mentors who serve as college coaches for Promise students, freely giving thousands of hours of time.

Without bureaucratic hurdles in the way, Tennessee students complete valuable community service and earn an education that makes them better citizens. As a result, more Pell-eligible students are attending school.

The Tennessee Promise is making educational equity a reality.

The problem of student success, finance, and completion is complex. Governments, colleges and students are all looking for solutions. What practical steps can your institution take?